Is Andrew Tate On Steroids? | Natty or Not

Is Andrew Tate on steroids?

Then you’ve come to the right place. Inside, you’ll find the official Testosterone.org breakdown of whether or not Andrew Tate has ever used gear before…

Andrew Tate is one of the most popular men in the world today. He is famous for being a 4x kickboxing world champion, being a self-made multi-millionaire, and for having one of the largest super-car collections in the world.

Some people have accused Andrew Tate of using anabolic steroids to build his incredible physique. However, Andrew has always denied using steroids.

He claims he has “fire blood,” which allows him to stay completely shredded with a questionable training routine and diet.

There may be more to the story though…

So what’s the verdict – is Andrew Tate natty? Or is he using anabolic steroids behind everyone’s back to maintain his incredible physique?

Anabolic steroids are some of the most powerful drugs in the world. But what are they, and why do they work so well for building muscular size and strength?

Steroids are a special type of performance enhancing drug. They work by raising testosterone and other muscle-building hormones to supra-physiological levels.

As you may already know, testosterone is the primary muscle-building hormone in the human body. Testosterone binds to the androgen receptors on your muscle cells, which increases protein synthesis and overall muscle growth [2].

Steroids are so effective for building muscle mass because they raise your total testosterone levels to supra-physiological levels.

In other words, they raise your total testosterone levels above and beyond what your body can produce naturally.

Unfortunately, anabolic steroids are very dangerous, and have many unwanted side effects.

They are illegal in the United States and most developed countries. However, at least 1 million people in the US has admitted to using steroids. And as many as 6.4% of all men in the world have used them at some point in their adult lives [1].

Research shows they have many serious side effects, and can even cause damage to your heart, liver, kidneys, and other internal organs [3] [4].

Here at Testosterone.org, we recommend that most people avoid steroids altogether. However, if you believe that using steroids is the right decision, then we recommend you proceed with extreme caution, and perform plenty of research before getting started. 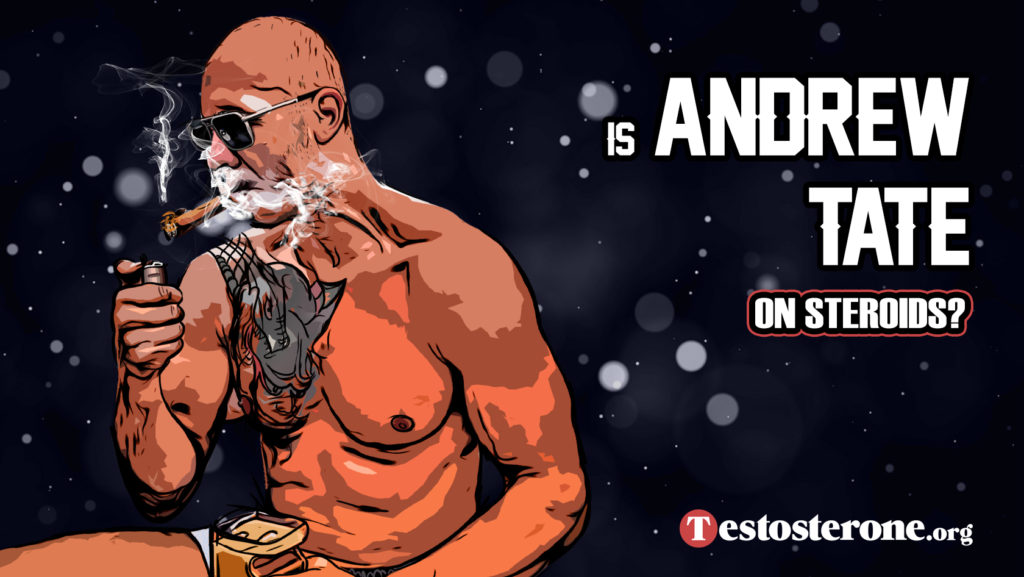 Is it really possible to tell if someone like Andrew Tate is on steroids? It’s hard to say for sure. However, most steroid users have some key side effects that you can look for.

Here are some of the most common symptoms of long-term steroid use:

One of the most common signs of long-term steroid use is a completely shredded physique. This is especially true if someone stays ripped year-round! Most “natural” athletes have a very difficult time getting shredded.

If you see someone who is absolutely ripped all the time, then they may be using gear.

Another obvious sign of long-term steroid use is massive, overpowering shoulder muscles. The shoulders have a large number of androgen receptors. This means they grow very quickly when someone is on gear.

It’s extremely rare to see a “natty” athlete with massive 3-D delts, so if you see someone like this, they are probably using steroids.

Other signs of long-term steroid use include a large “growth hormone gut,” a square shaped physique, or red / flushed skin.

These signs do not automatically mean someone is on gear. However, if someone has most or all of these signs, then the odds are high that they are on gear.

Is Andrew Tate On Steroids?

Is Andrew Tate really natty? Or is he using anabolic steroids to maintain his ripped physique and get more social media followers? Let’s look at the facts before jumping to any conclusions.

Andrew Tate has the following signs of long-term steroid use:

Andrew Tate claims he is natural. However, his signs of long-term steroid use are hard to ignore.

First of all, Andrew Tate is completely shredded. He looks like he is about 8% body fat, and he maintains his ripped physique year-round.

Most natural athlete have a very hard time getting this lean.

And when they do, it’s very difficult for them to stay this lean. After all, studies show that men’s testosterone levels start to fall once they get significantly below 10% body fat.

Is it really possible for a natural athlete to stay this lean year-round? The answer is yes – but it’s extremely rare…

Andrew Tate also has an insanely muscular physique. His shoulders and traps look like they belong on a professional bodybuilder!

It’s very common to see “enhanced” athletes with large shoulders and traps. These muscles have a large number of androgen receptors, and grow extremely quickly when someone is using gear.

However, to develop them as a natural athlete is very difficult.

Of course, the rest of his upper body is also extremely muscular, which may be another sign of steroid use.

So what does Andrew Tate have to say about these accusations?

The truth is, Andrew Tate has always denied using steroids. He says he was drug-tested dozens of times as a professional kickboxer, and his drug tests always came back negative. He says that he built an incredible base as a fighter, and now he just has to maintain his physique.

He also claims that he has “fire blood” running through his veins, which lets him stay in peak physical condition.

“I have never taken an injection in my entire life. Not during my fight career, not now. Pill, injection – I’ve taken none of it! I know that I don’t need it, because I’m top G!”

“You know what I’m not doing? Cutting up little broccoli and putting it into little boxes. If I make enough little boxes, maybe I’ll get some biceps? Weak! I don’t have to do that! I have fire blood!”

It’s hard to believe that Andrew Tate is really natty. However, he gave his bloodwork to Derek from More Plates More Dates, and his testosterone levels are actually within the normal range.

Derek said his hemoglobin levels were unusual, but Andrew Tate says this is just a psy-op.

Andrew Tate has many of the usual signs of long-term steroid use. However, his bloodwork shows he has normal testosterone levels, and he’s never failed a blood test.

Based on this information, I’m going to give Andrew Tate the benefit of the doubt and say he is 100% natty. Case closed!

Andrew Tate Before And After Steroids

Andrew Tate has many of the usual signs of long-term steroid use, such as an insanely muscular physique, and a completely shredded upper body.

The truth is, Andrew Tate used to look like a normal guy.

But now that he is retired from professional fighting, he looks like a juiced up gear monkey! 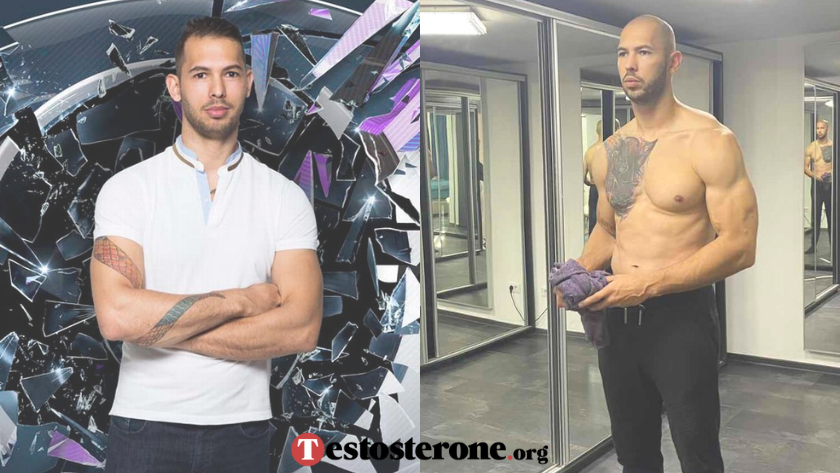 Believe it or not, Andrew Tate probably built his incredible physique as a natural athlete.

He never tested positive for performance enhancing drugs during his professional kickboxing career, and he has relatively normal testosterone levels. This is great news for anyone who wants to build a great physique without using illegal drugs.

Of course, if you want to speed up your progress as a natural athlete, then you may want to look into a great legal steroid alternative like turkesterone.

Turkesterone is known as a natural plant steroid. Many plants like ajuga turkestanica naturally produce turkesterone because it boosts protein synthesis,and speeds up their overall growth and development.

However, research shows that it may work just as well in humans for building muscle mass and strength.

Studies show that turkesterone can boost protein synthesis levels by as much as 20%, which makes it almost as effective as many anabolic steroids [5, 6]!

Here are a few of the benefits you can expect while using turkesterone:

Best of all, turkesterone does NOT impact your hormone levels. This means it does not have the side effects of traditional steroids, and you do not need to use a post-cycle therapy after using it.

If you are serious about reaching your fitness goals in record time, then getting started with a quality turkesterone product is the obvious choice.

This means you are getting the highest quality turkesterone product available anywhere in the world.

Here’s how it works: if you are suffering from signs and symptoms of low T, then your doctor will order a comprehensive blood test to measure your hormone levels.

If the blood test shows that you have low T, and it is causing your symptoms, then he or she may give you a prescription testosterone medication to safely raise your total testosterone levels.

Testosterone replacement therapy has many benefits, including [7, 8, 9]:

As you can see, testosterone therapy positively impacts almost every area of your physical and mental health.

If you are curious about testosterone therapy, then we recommend working with a great online TRT clinic like Fountain TRT.

What’s the verdict – does Andrew Tate use steroids?

It’s hard to say for sure. However, we believe the odds are very high that Andrew Tate is natty.

Andrew Tate does have many signs of long-term steroid use, such as his ripped physique and muscular upper body. However, Andrew has always tested negative for steroids, and Derek from More Plates More Dates says he has relatively normal testosterone levels.

Andrew probably just has great genetics. After all, he was a 4x kickboxing world champion! He also spent many years training as a world-class athlete, so he probably has an easy time maintaining his muscular physique now that he is retired.

To be fair, it’s hard to believe that Andrew Tate can maintain his physique just by performing a few hundred push ups a day. However, after looking at all the evidence, it looks like Andrew is natty after all.

If you want to build a great physique like Andrew Tate, then you can always look into a great TRT provider like Fountain TRT to give you an extra boost.

You can also look into a great legal steroid alternative like turkesterone to speed up your gains.

Turkesterone may not give you “Top G fire blood” like Andrew Tate. However, it may be just what you need to take your physique to the next level!