Then you’ve come to the right place, as we detail exactly what this over-the-counter supplement is and why athletes love it – while also detailing side effects and any safety concerns.

We’re all concerned with safety, and rightfully so. In recent years it’s become evident that the world of performance enhancing supplements has boomed, but some have tried taking advantage of your fellow Joe.

So, are you curious; is MK-677 Safe? In this guide, we will tell you everything you MUST know about the safety of MK-677.

MK-677 is a growth hormone secretagogue that was originally developed and patented in the 1990’s. This means that MK-677 would stimulate the user’s own pituitary gland to produce more endogenous Growth Hormone. MK-677 was originally intended to be used by individuals suffering from muscle wasting diseases, or who simply had a growth hormone deficiency [1, 2].

Medical professionals would usually administer exogenous growth hormone to correct this deficiency in patients. However, MK 677 has been developed as a new research chemical.

MK-677 is sometimes lumped together with SARMs, or Selective Androgen Receptor Modulators. However, the reality is that MK-677 is not a SARM at all. Compared to SARMs and Steroids, which would bind to Androgen receptors in muscle and bone tissue, MK-677 has only been shown to stimulate the pituitary gland to produce more growth hormone in human subjects.

Now that it has been established that MK 677 can indeed have physiological benefits, the next logical thing to look at its safety in humans. It has to be mentioned again, that even though MK 677 is often grouped with SARMs, it is not in any way, shape, or form a real SARM. It is technically a research chemical, and it does not bind to androgen receptors the same way that SARMs and steroids do.

MK-677 will simply stimulate the pituitary gland to produce more growth hormone. This in turn will induce the generation of IGF-1 levels within the liver which can help with muscular growth. Growth Hormone will also downregulate the uptake of free fatty acids into adipocytes, while simultaneously encouraging the body to use those free fatty Acids as fuel.

While MK-677 has been tested in the medical field, and has been extensively tested by independent researches, more scientific research is required That being said, studies have found MK 677 to be quite safe in human subjects. For instance:

While still classified as a research chemical, these and other studies show that MK 677 seems to be safe for usage, when taken at reasonable doses.

Of course, everything does have side effects. In fact, the reason why MK-677 is still recognized as a research chemical is because further testing is still needed to identify the effects in full.

Even though MK 677 is a research chemical, there seems to very few if any safety concerns regarding the compound. The only thing that is important to note is that adverse effects will be kept at bay if you follow a reasonable dose. 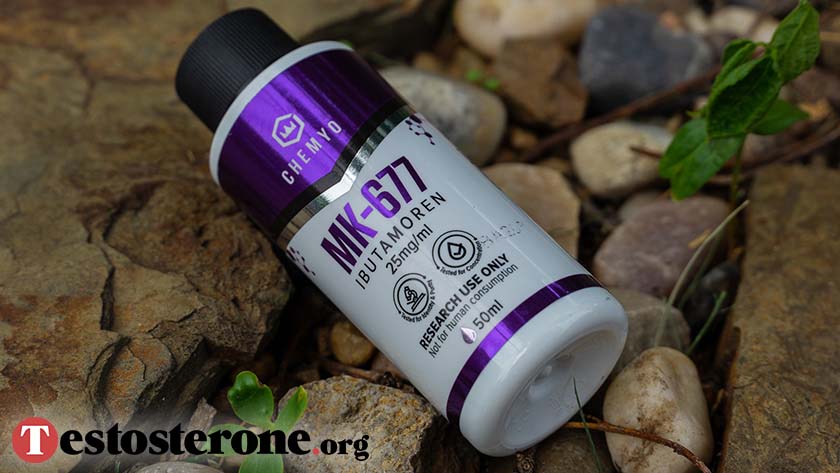 When it comes to the actual dosing of MK-677, it is important to note that a cycle longer than 12 weeks or 3 months is not advised. While there is technically no minimum time you need to run MK-677 to get the positive effects, a cycle ranging from 8 – 12 Weeks is a good place to start.

There are various studies testing different dosages of MK 677, ranging from 10mg to 50mg per day. The most advantageous dosing was found to be at around 10 – 25 mg per day. Doses higher than 50mg per day have not been researched and should be avoided at all costs.

Studies on human subjects have shown that using MK-677 at a dose of 10mg per day for 8 – 12 weeks is enough to see significant benefits. That being said, research studies show that doses as high as 25mg per day have additional benefits in human subjects with no apparent adverse side effects [1].

Bodybuilders have the singular goal of being as big and lean as possible on the day of their bodybuilding competition. Bodybuilders will not only use a vast array of anabolic steroids, but will also use exogenous Growth Hormone to reap the fat loss and muscular hypertrophy benefits. This creates a problem as exogenous growth hormone is known to downregulate the production of endogenous growth hormone [13].

Research studies show that a growth hormone secretagogue like MK-677 may help subjects to boost Growth Hormone and IGF-1 levels without shutting down their own endogenous growth hormone production.

MK 677 falls under the umbrella of SARMs, which are legal to purchase, under certain circumstances. MK 677 may only be sold labeled as a research chemical, and with the phrase “not for human consumption” somewhere on the product.

Other SARMs have to be sold under the same conditions, as more research is needed on these products before they will be approved by the FDA

MK-677 clearly has benefits for research subjects when administared in the right situation. The best MK-677 supplement we can recommend will have to be the MK-677 produced and sold by Chemyo. Chemyo is an American based company aiming to produce exceptionally good quality research chemicals at a cost-effective price.

Not only is their MK 677 cost-effective, it has also undergone third party testing, and is also available in a 50ml container, which is sure to keep you stocked up for a long time. Both the MK 677 and the company have great reviews on their site and on independent sites, like Reddit.

Most Research Chemicals need quite a bit more research done on their safety. The only one that has been proven to be safe and effective in human subjects is MK-677. It is a growth hormone secretagogue that shows very little adverse effects, and even the ones that are present are easily managed.

MK-677 could have beneficial effects on a fat loss phase, as well as just increasing the quality of life. This research chemical has a lot going for it, including remarkable safety.