Is Turkesterone Natural? | What You MUST Know

Curious… is turkesterone is natural?

Do you want to know if this popular supplement can help you get an edge in the gym – but without causing negative side effects?

Then you’ve come to the right place. In this comprehensive guide, we detail everything you need to know about turkesterone, including whether it really is a “natural” supplement.

Our team conducted thorough research on turkesterone, the effects it can have on your body, how to take it, and answering other questions you might have.

After reading this in-depth guide, you will have all the information you need to make an informed decision on turkesterone, including whether it’s the right choice for you, how much to take, and where to buy it from.

Turkesterone belongs to a family of plant compounds called ecdysteroids.

These studies were initiated with the objective of developing safer and more specific insecticides as certain hormones in plants were initially suggested to act as a defense against insect predators [1].

Upon further study, however, it has been revealed that these compounds, such as ecdysterone and turkesterone, are not toxic to mammals [2].

Ecdysteroids possess a host of pharmacological benefits which are widely used in traditional medicine throughout central Asia.

More specifically, turkesterone has been a subject of study in vertebrates like mice since 1975 because of their anabolic and therapeutic effects. They’ve also been shown to provide pharmacological benefits against diabetes and heart disease [2, 3].

Turkesterone is popularly referred to as ‘the plant steroid’, due to the fact that it bears a molecular similarity to the structure of testosterone.

This natural substance actually belongs to a large family of over 200 plant and insect hormones called ‘ecdysteroids’, of which ecdysterone, another supplement that has recently increased in popularity, is also part of.

Besides certain plants like Ajuga Turkestanica, you’ll also find it in arthropods – insects with an exoskeleton, like grasshoppers – where it serves the purpose of controlling their molting process [1]. 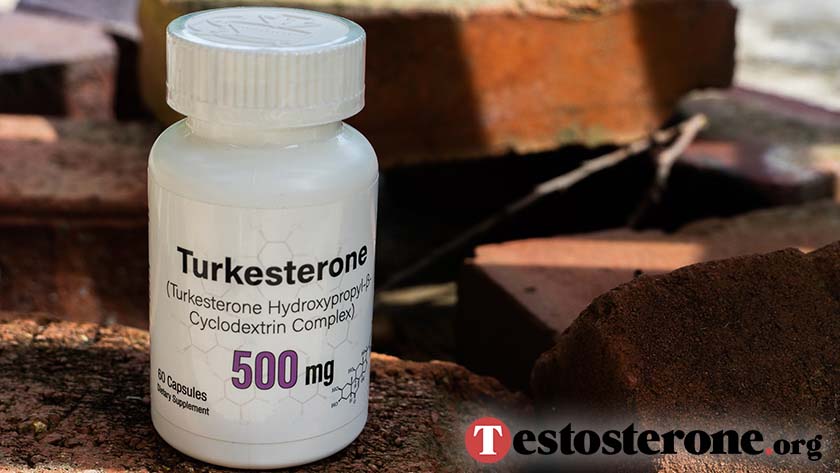 Where exactly does turkesterone come from? How is it produced?

Turkesterone is a naturally occurring compound found in a number of thistle-like plants throughout central Asia, such as Leuzea Carthamoides, Rhaponticum, Stemmacantha Uniflora [4].

Just like humans produce hormones like testosterone and estrogen, arthropods and several plants also produce turkesterone. For arthropods, the hormone helps in their molting and reproduction process, while in it serves to drive away the threat invertebrate predators for plants.

This potent plant steroid belongs to a large family of substances called ecdysteroids.

Also known as phytoecdysteroids, their molecular structure is actually similar to androgens – substances responsible for promoting both internal and external physical traits seen in males, such as testosterone [5].

Ecdysteroids are known in layman’s terms as a ‘plant steroid.’

Some, such as ecdysterone, are found primarily in plants like spinach and quinoa, and are also present in certain arthropod insects. The prefix ‘ecdy’ refers to the process of molting in insects, called ecdysis [6].

Turkesterone extracts are acquired from plant sources as they provide a larger concentration of the compound and are naturally more available for sourcing turkesterone. Polar solvents like ethanol or methanol are required to extract turkesterone from arthropods and plants [7].

When it comes to extracting ecdysteroids like turkesterone from plants, they are screened by RIA for ecdysone-like immunoreactive compounds or for molting hormone activity by an appropriate bioassay.

Plants that possess the desired compound are then taken through an appropriate extraction and isolation scheme monitored by the assay used for screening the whole plant until a chromatographic peak is recognized as being associated with the activity [7].

Because of its anabolic properties, researchers have repeatedly asked the question, “is turkesterone a steroid?”

The answer is no, turkesterone is NOT an anabolic steroid.

Even though turkesterone is known to possess certain anabolic properties, it is not legally considered to be an anabolic or androgenic steroid by any governing bodies.

It’s easy to see why turkesterone is sometimes called a steroid, though.

Studies have shown that turkesterone induces hypertrophy of muscles with a comparable or even higher potency when compared with anabolic androgenic steroids, SARMs, or IGF-1 [8]. It’s also no wonder ecdysteroids like turkesterone were suspected of being used by Russian Olympic athletes as part of their training in the 1980s.

In short, turkesterone is natural, and can be utilized by consuming plants known to possess high quantities of this hormone, applying such plants topically, or extracting and ingesting it in powder or capsule form. 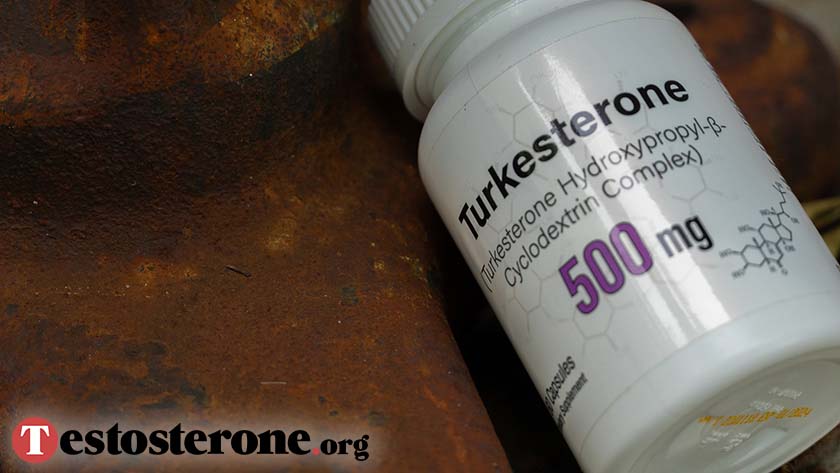 After going through the data available on turkesterone and closely related ecdysteroids like ecdysterone, we can confirm that this supplement is generally safe when used responsibly.

One issue with anabolic steroids is that they are typically administered by injection into the bloodstream with the use of a syringe.

On the other hand, turkesterone is consumed orally – either in powder form, or through capsules – making it a much more practical and preferred alternative to most other traditional anabolic steroids out there.

One of the most important points to consider regarding turkesterone’s safety profile, is that it does not disrupt the endocrine system in mammals like anabolic steroids do.
The main takeaway from this, is that cycling turkesterone will not cause testosterone levels to fall drastically once a cycle is over, which therefore also eliminates the need for a post-cycle therapy, or PCT [8].
Overall, neither ecdysterone nor turkesterone cause the side effects normally seen with anabolic steroid use.

One of the main reasons for this is because of the molecular structure of ecdysteroids. Even though they possess a similar structure to anabolic steroids, they don’t actually bind to the steroid receptors in vertebrates [1].

The researchers found that ecdysteroids like turkesterone had the potency of steroids which have been around for many decades already, like dianabol. The research team strongly suggested that turkesterone be included in the list of banned substances.

Although turkesterone wasn’t added to the List of Banned Substances, as of 2020 it was added to the list of substances in the WADA Monitoring Program.

We’ve still yet to see if it’ll be officially banned in professional sports or not [10].

So, even turkesterone is under a bit of scrutiny from the scientific and professional sports communities, the answer is yes, turkesterone is legal for commercial use, and in competitive sports.

Unlike other traditional anabolic and androgenic steroids, turkesterone is not classified as an anabolic steroid, making it completely legal to purchase, possess and consume in the United States. 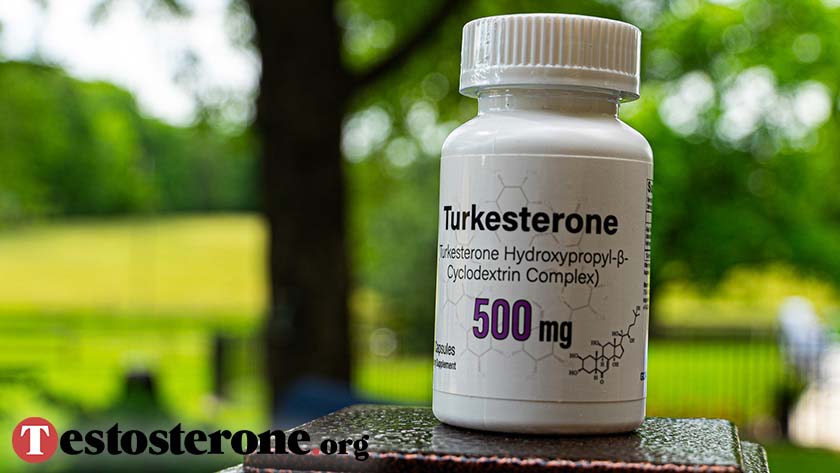 What are the Benefits of Turkesterone?

When used responsibly, and with the proper dosage, turkesterone can produce a number of potent effects for both bodybuilders and athletes involved in various pursuits.

First and foremost, one of the top potential benefits of turkesterone is increased muscle size and strength. This has been proven in various studies on rodents [1]. This increase in strength and size mainly stems from turkesterone’s ability to increase in protein synthesis by up to 20%.

Others have compared the muscle gains from turkesterone to what one could expect from taking a cycle of dianabol – one of the more popular oral anabolic steroids [1, 5].

Turkesterone also lowers lipid absorption, improves nitrogen retention, and contributes to a better protein metabolism profile with lowered protein catabolism and increased anabolism. On top of that, turkesterone has also been found to cause increases in both skeletal muscle mass and muscle protein [1, 11].

Ecdysteroids like turkesterone and ecdysterone have also been shown to increase ATP synthesis, which can lead to higher levels of stamina and endurance. This benefit is particularly important for those doing aerobic exercise requiring long bouts of effort.

Research has shown adaptogenic properties particularly in swimmers, which increased the amount of time they could remain moving in the water by up to 22%.

It was also found to improve the ability of mice to run for up to 32% longer before reaching a point of fatigue [5].

Turkesterone and other plants that it is derived from, such as Ajuga Turkestanica, have also been shown to improve and speed up the healing process in wounds, and contribute to epidermis regeneration [12].

The recent surge in popularity of turkesterone and other ecdysteroids throughout the bodybuilding and fitness community mainly lies in its anabolic properties.

One key fact to point out is that a standardized dosage for turkesterone for the purpose of building muscle and enhancing athletic performance has yet to be determined.

Not only does the right dosage vary depending on individual body weight and the differences in how each person’s body processes anabolic substances, but there is no human trial data available yet to provide a medically suggestible dosage and cycling protocol.

In order to best understand why and how turkesterone is used in bodybuilding, it’s important to first understand the circumstances under how this supplement, along with other ecdysteroids, were initially studied.

Also, the total protein and glycogen content of their organs increased after administration of turkesterone for 10 days [9].

Another study where a similar ecdysteroid, ecdysterone, was administered orally for 60 days on mice in doses of 5-100ug/animal/day reported increased growth on the treated mice, enhanced protein synthesis in the liver and kidney, and also a slightly altered morphological structure of the liver cells [6].

All in all, we’d recommend that turkesterone cycles be kept under ten weeks, and that the effects be closely monitored in the meantime.

At the time of this writing, there are over 150 different ecdysteroid supplements, like turkesterone, currently on the market.

Although many companies claim that their turkesterone products are legitimate, upon further investigation, you will find that some vendors are certainly more transparent than others. This is why we’ve taken the time to research through the various turkesterone supplements found on the market.

Our team examined a number of different vendors according to a set of particular criteria.

Our top recommendation for a vendor to purchase turkesterone from is Gorilla Mind. Here’s why:

We strongly suggest taking advantage of their 3 bottle discount on Gorilla Mind Turkesterone, so that you’ll have enough to run a proper 3 month cycle.

The answer is yes, turkesterone is 100% natural.

Turkesterone is natural, due to the fact that it is a naturally occurring compound found in various plants growing throughout central Asia, such as Ajuga Turkestanica, which have been used for their medicinal properties for centuries.

This is good news, as turkesterone is one of the most promising legal steroid alternatives in the world today.

Turkesterone likely has a bright future in bodybuilding, thanks to its ability to enhance strength, stamina, and overall performance in athletes, as well as its lack of safety concerns, easy dosage guidelines, legal status, and massive muscle-building benefits.

Are you ready to get started with turkesterone?

If so, Gorilla Mind is our #1 recommendation for a reliable turkesterone product. They make their turkesterone from pure Ajuga Turkestanica leaves, so you know you are getting the highest quality product available anywhere in the world.

Grab a bottle of Gorilla Mind turkesterone today and take your training to the next level!