Is Layne Norton On Steroids?

Is Layne Norton on steroids?

Then you’ve come to the right place. Inside, you’ll find the official Testosterone.org breakdown of whether or not Layne Norton has ever used gear before…

Layne Norton is one of the biggest names in the fitness industry. He is famous for becoming a pro natural bodybuilder, breaking numerous powerlifting world records, and of course, his incredibly popular YouTube channel where he shares fitness advice with over 250 thousand subscribers.

Some people have accused Layne Norton of being a “fake natural.” They say Layne must have used steroids when he was younger, as no one can get as big or strong as him without using performance enhancing drugs.

So what’s the verdict – is Layne Norton really natural? Or did he use illegal steroids to gain an unfair advantage over his competitors? Let’s find out!

It seems like everyone in the fitness industry is using steroids or other performance enhancing drugs to improve their physique.

But what are steroids, and what do they actually do to the human body?

The truth is steroids are a specific type of performance enhancing drugs. They work by boosting testosterone and other muscle-building hormones inside the human body.

Of course, we aren’t just talking about “optimizing” your natural testosterone levels like you would do on a doctor-supervised TRT program. Instead, the goal with steroids is to raise your total testosterone to supra-physiological levels, or well beyond what your body can produce naturally.

This is obviously helpful if your goal is to get bigger and stronger.

Steroids are illegal in the United States and most developed countries, but many people have decided to use them anyways.

As many as 1 million men have used anabolic steroids in the United States alone; steroids are even more popular in other countries, with as many as 6.4% of all men using them at some point in their lifetime [1].

Real-world experience tells us that anabolic steroids are very effective for building muscle mass and losing body fat, and this is exactly what the newest research studies show [2].

Many users find that they can completely transform their physique after a 12-week steroid cycle!

Unfortunately, steroids are extremely dangerous and have many risky side effects. Studies show that steroids are especially dangerous to the cardiovascular system, with many users experiencing increased risk for blood clots, atherosclerosis, and heart damage [3] [4].

If you want to optimize your hormones, but want to avoid something as dangerous as anabolic steroids, then something like testosterone replacement therapy may be a good option for you. 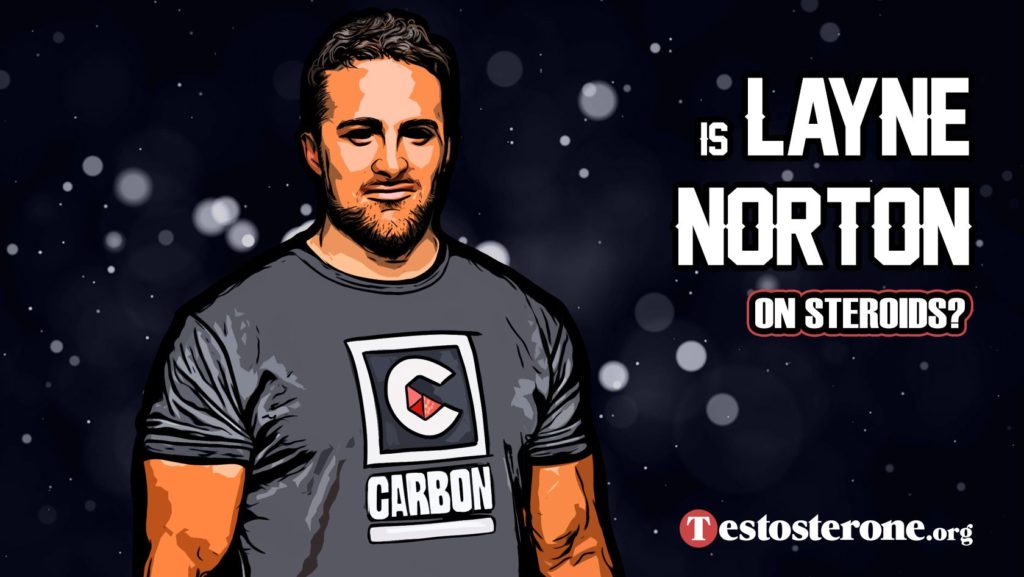 There are plenty of “fake naturals” in the fitness industry. But is it really possible to say if someone is on gear? The truth is most steroid users have some obvious side effects that you can look for.

Here are some of the most common signs of long-term steroid use:

One of the classic signs of steroid use is large, overpowering body parts. For example, many steroid users have shoulders and traps that dominate the rest of their body.

This makes sense, as these 2 muscles have a large number of androgen receptors.

Another obvious sign of steroid use is extreme vascularity. If you see someone with veins all over their body, or the an extremely thick “bicep vein” that bulges off of their upper arm, then they may be using gear.

Other signs of steroid use include an insanely muscular physique, extremely weak muscles, and “roid rage.”

If you know someone with most or all of these signs, then they may be using performance enhancing drugs.

Is Layne Norton On Steroids?

Is Layne Norton really a natural bodybuilder? Or did he use anabolic steroids behind everyone’s back? Let’s look at the facts before jumping to any conclusions.

The truth is, Layne Norton doesn’t have any of the obvious signs of long-term steroid use. We believe that Layne is a gifted athlete who did everything he could to max out his natural genetic potential.

Here are some of Layne Norton’s biggest accomplishments in bodybuilding and powerlifting:

Let’s start by looking at Layne’s performance as a bodybuilder.

Layne Norton became a pro natural bodybuilder in 2006, and went on to win 7 professional bodybuilding contests. However, this doesn’t necessarily mean he used steroids.

Layne only competed in drug-tested competitions, and even at his peak, he only weighed about 195 pounds on the bodybuilding stage. This is extremely small compared to most “enhanced” bodybuilders.

For example, Dorian Yates was also about 5 feet 10 inches tall, but he competed at a whopping 260 pounds on stage in the 1990s!

Layne Norton’s physique is clearly achievable by a gifted natural bodybuilder, so there’s no reason to accuse him of using steroids there.

Layne Norton is also incredibly strong and even holds a powerlifting world-record squat. However, his lifts are still achievable by a natural bodybuilder with great genetics.

It’s certainly possible for a natural athlete to squat or deadlift 600-700 pounds, especially if they work as hard as Layne did during his powerlifting career.

The truth is, we believe Layne Norton 100% when he says he is natural. He has competed in numerous drug tested bodybuilding and powerlifting competitions, and he has never failed a drug test.

This alone is enough reason to believe Layne is not on steroids.

Another factor to consider is that Layne was extremely big and strong very early in his career. In his early 20’s Layne Norton could press the 150 pound dumbbells for 5 reps!

We believe Layne is a gifted athlete who realized most of his natural potential early in his career. His progress slowed down starting in his mid 20’s, which is normal for a gifted bodybuilder who does everything correctly from an early age.

The bottom line is Layne Norton is 100% natty. There just isn’t any strong evidence to suggest he used performance enhancing drugs during his athletic career.

Layne Norton Before And After Steroids

Layne Norton is jacked and tan with a very muscular upper body. But did he always look this way?

The truth is, Layne Norton always had a very muscular looking physique. Even as a teenager he had visible six-pack abs and decent muscle tone in his chest, shoulders and arms.

He started training hard, and by the time he was in college Layne Norton was absolutely jacked. By his early 20s he was flat pressing the 150 pound dumbbells for reps and performing other incredible feats of strength in the gym.

Layne is proof that you don’t need anabolic steroids to build a great physique – especially if you have above-average genetics. 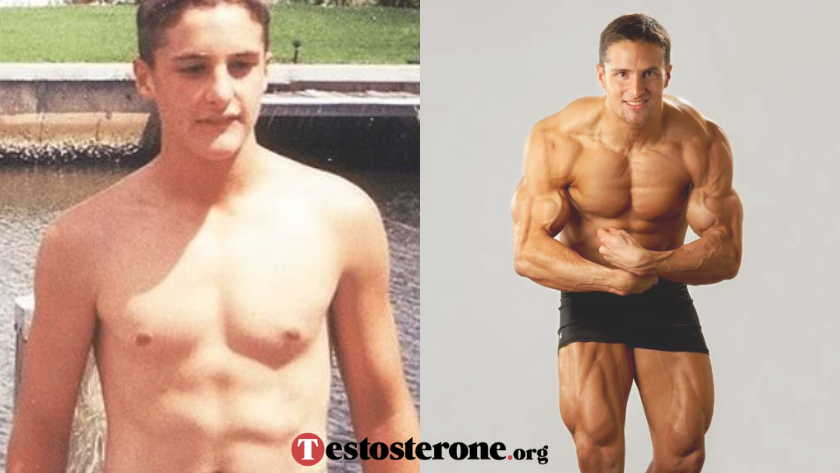 Layne Norton is one of the true “natural” athletes in the fitness industry.

We really like guys like Layne, as they show you can completely transform your physique without performance enhancing drugs.

Besides, anabolic steroids have many dangerous side effects, so they are probably not a good idea for most people.

If you want to get steroid-like results in the gym, but don’t want to use traditional anabolic steroids, then you may want to look into something called “legal steroid alternatives.” These are legal, over-the-counter products that have a dramatic impact on your ability to build muscle mass.

Based on numerous studies, we feel that ecdysterone is the #1 legal steroid alternative on the market today.

Here’s what you need to know: ecdysterone is a natural plant substance that dramatically increase human performance in the gym. One recent study shows that ecdysterone increases muscle protein synthesis in humans by as much as 20%, while another one proves that ecdysterone is as effective as many anabolic steroids for building muscle mass [5, 6].

Don’t worry – ecdysterone is not a steroid, and it has no side effects in humans.

Ecdysterone is actually found in spinach and quinoa, so if you eat these foods, you are naturally getting some ecdysterone in your diet. You would need to eat almost 30 pounds of spinach per day to get a muscle-building dose of ecdysterone, so most fitness experts choose to use an ecdysterone supplement instead.

Talk about a powerful supplement!

Best of all, ecdysterone is perfectly safe, with virtually zero long-term side effects.

If you are ready to get started with the world’s best legal steroid alternative, then we strongly recommend the online company Huge Supplements. They manufacture all of their products right here in the United States under FDA regulated facilities, so you know you are getting a premium quality product.

If this describes you, then you may be a good candidate for TRT. Here are some of the benefits you can expect when starting a doctor-supervised TRT program [7, 8, 9]:

If you are ready to get started TRT, then we strongly recommend a reliable online TRT provider like Fountain TRT. They are our clear #1 choice because they have some of the most experienced and qualified testosterone doctors in the world.

What’s the verdict – does Layne Norton use steroids?

We believe the odds are extremely low that Layne Norton used anabolic steroids during his career as a bodybuilder / powerlifter.

It’s true that Layne Norton has a very muscular physique. He is as big as many of the best natural bodybuilders in the world, and he even managed to break several powerlifting world records.

However, his results are still realistic for a dedicated drug-free athlete with great genetics.

After all, Layne Norton only weighed about 205 pounds for his professional natural bodybuilding competitions, and at his peak he was only squatting / deadlifting in the 700 pound range – a far cry from the best “enhanced” athletes in the world.

Besides, Layne Norton has competed in countless drug-tested competitions, and he has never failed a drug test. We consider this a case-closed situation: yes, Layne Norton is 100% natural.
Layne is proof that you can build a great physique and get freaky strong without drugs.

However, if you are still interested in optimizing your hormone levels, then you may want to look into testosterone replacement therapy. Fountain TRT is our #1 recommendation for an online TRT provider, as they make it as easy as possible for you to get started.