Is Lazar Angelov On Steroids?

Is Lazar Angelov on steroids?

Then you’ve come to the right place. Inside, you’ll find the official Testosterone.org breakdown of whether or not Lazar Angelov has ever used gear before…

Lazar Angelov is one of the biggest fitness influencers in the world today. He is most famous for his incredibly popular YouTube and Instagram channels, where he shares training and nutrition advice to over 6 million subscribers.

Some people have accused Lazar Angelov of using anabolic steroids to build his super-human physique.

So what’s the verdict – is it really possible to get as jacked as Lazar Angelov as a natural bodybuilder? Or did he use anabolic steroids to go beyond his natural limits and take his physique to the next level? Let’s find out!

Anabolic steroids are a permanent part of the modern-day fitness industry. It seems like everyone is using steroids to transform their physique in record time.

But what are steroids, and what do they do to the human body?

Anabolic steroids are man-made versions of testosterone and other naturally occurring hormones.

Steroids were originally used by doctors and other researchers to help men who were suffering from low testosterone levels. However, nowadays anabolic steroids are more commonly used by athletes and other bodybuilders to boost their total testosterone to extremely high levels.

Steroids are very effective at building muscle mass and strength, but they can be very dangerous when used improperly. They are also illegal in the United States and many first-world countries.

Despite their status as an illegal drug, steroids are somewhat popular – especially among men.

As many as 1 million men in the United States has admitted to using steroids, and the prevalence rate is even higher in many other countries [1].

Unfortunately, steroids have many dangerous side effects. They can cause long-term damage to your heart, kidneys, and liver, among other complications [3] [4]. 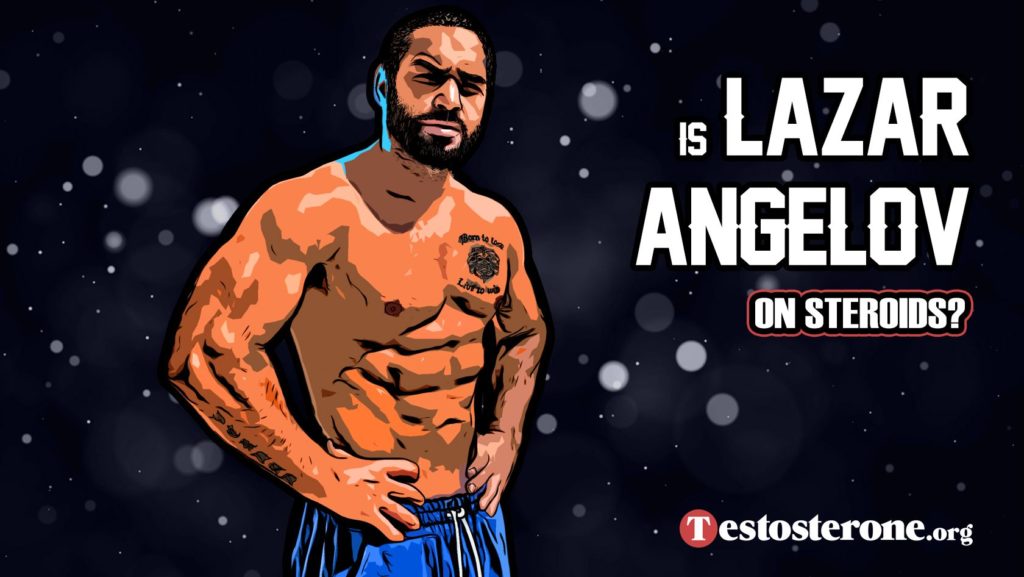 Have you ever been curious if someone is on steroids? The truth is most steroid users have some side effects that you can look for.

Here are some of the most common signs and symptoms of long-term steroid use:

Another dead giveaway of steroid use is a rapid body transformation. Many Hollywood movie stars are able to gain 10, 20, or even 30 pounds of muscle in a short period of time while losing body fat!

This is obviously impossible for most natural athletes, including the best natural bodybuilders in the world.

Other signs of steroid use include “growth hormone head,” an insanely bloated stomach, or red / flushed skin.

Is Lazar Angelov On Steroids?

Is Lazar Angelov natty? Or did he use anabolic steroids to become one of the biggest fitness influencers in the world? Let’s look at the facts before jumping to any conclusions.

Lazar Angelov has the following signs of long-term steroid use:

As you can see, Lazar Angelov has many of the most common signs of anabolic steroid use. However, that doesn’t automatically mean he’s on gear…

The first thing we notice when looking at Lazar Angelov is his insanely muscular physique. Lazar looks absolutely massive with large, 3-D delts and powerful traps. He definitely has the look of someone that is on performance enhancing drugs.

However, in reality Lazar’s physique is probably achievable by a gifted natural athlete.

Lazar is 5 feet 10 inches tall and only weighs about 188 pounds. In other words, he is lighter than other confirmed natural bodybuilders like Layne Norton.

Sure, Lazar has some big shoulders and traps. But they aren’t that out of proportion compared to the rest of his body. He may be the rare individual who can build massive 3-D shoulders without using drugs.

The bottom line is Lazar’s physique is incredible, but it’s still probably achievable by a dedicated natural athlete.

However, there is one more sign of steroid use that we have to talk about: Lazar’s rapid body transformation.

In 2004 Lazar looked like a regular guy who lifted weights on the weekends. However, in just two short years he transformed his physique from “weekend warrior” to “God bod.” It takes most people at least 3-5 years to build a truly impressive physique, but Lazar did it in under 2 years.

Is this conclusive evidence that Lazar Angelov used anabolic steroids?

It’s hard to say for sure, but his rapid body transformation makes me think that performance enhancing drugs were probably part of the equation.

So what does Lazar Angelov have to say about these accusations?

Lazar says that he has never used traditional anabolic steroids – only the drug ‘clenbuterol’ when he was in a dieting phase. It’s normal for fitness influencers to deny using steroids, as they have a bad reputation, and they make it look like the user took the “easy way out” in building their physique.

So what’s the verdict?

In my opinion, it’s extremely difficult to say whether or not Lazar Angelov actually used steroids. One one hand, his physique is achievable by elite natural bodybuilders who train hard for several years.

On the other hand, Lazar was able to transform his physique from “weekend warrior” to “God bod” in just 2 short years.

Lazar’s rapid physique transformation, combined with his super human physique, is enough for us to say that Lazar Angelov probably used anabolic steroids.

Lazar Angelov Before And After Steroids

Lazar Angelov has many of the usual signs of long-term steroid use, such as an insanely muscular physique, massive shoulders / traps, and a completely shredded midsection.

The truth is, Lazar Angelov has one of the fastest physique transformations we have ever seen. In 2004 he looked like a regular guy who lifted weights on the weekends.

Sure, he had a muscular looking physique. But it was nothing out of the ordinary – and his physique in no way screamed “anabolic steroids.”

In 2004 Lazar Angelov got serious about his training, and by 2006 he had achieved his best look with six-pack abs and an extremely muscular upper body.

Lazar Angelov probably used anabolic steroids to complete this transformation, as it’s almost unheard of for a natural bodybuilder to transform their physique this quickly. 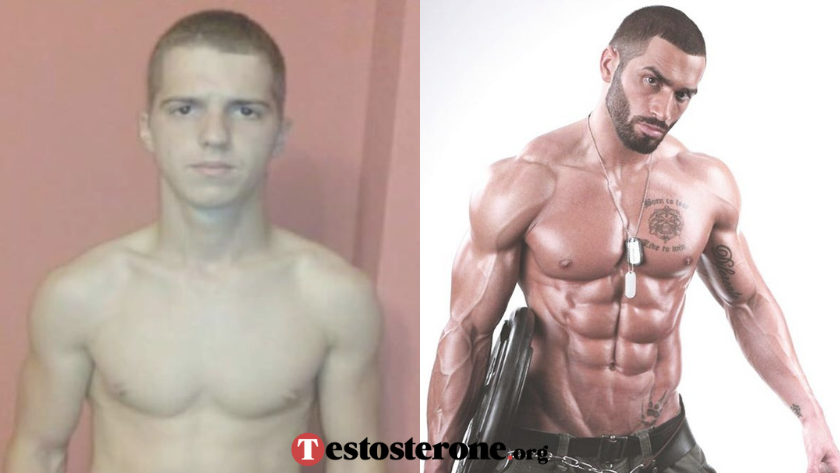 It’s hard to say for sure if Lazar Angelov used anabolic steroids to build his incredible physique. However, one thing we do know is steroids are probably a bad idea for most people.

Steroids have many dangerous side effects, and can cause severe damage to your body – especially your cardiovascular system.

Fortunately, there are legal over-the-counter products that you can use to make faster progress in the gym. These products are sometimes called “legal steroid alternatives,” as they deliver steroid-like results – but without any of their side effects.

Here’s what you need to know: ecdysterone is a natural substance found in spinach, quinoa, and many other plant species.

Plants produce ecdysterone because it speeds up their overall growth and development. However, recent research show that ecdysterone works just as well in humans for building muscle mass and strength.

New studies show that ecdysterone actually works as well as many anabolic steroids!

This is possible because ecdysterone increases the rate of protein synthesis in muscle cells by as much as 20% [5, 6].

Don’t worry – ecdysterone is not actually a steroid.

If you already eat spinach or quinoa, then you are already getting some ecdysterone in your diet. Supplementing with ecdysterone is just a safe way to get more of the muscle-building benefits of this legal steroid alternative.

Ecdysterone may not help you look like Lazar Angelov overnight, but it is a powerful tool that you can use to speed up your gains in the gym.

So who should you purchase your ecdysterone from?

Here at testosterone.org, we believe Huge Supplements is the #1 ecdysterone vendor in the world. Huge Supplements has incredible customer service, fast shipping, and countless 5-star customer reviews, so they are our clear choice.

Testosterone replacement therapy is a breakthrough treatment option that is helping millions of men optimize their testosterone levels, and improve their overall quality of life.

The latest research studies show that patients rarely experience side effects, especially when they are working with an experienced TRT doctor.

If you are ready to get started with testosterone therapy, then we strongly recommend you work with an experienced online TRT provider like Fountain TRT.

Online TRT clinics have many advantages over traditional in-person clinics, such as letting you talk to your doctor from the comfort of your own home.

What’s the verdict – does Lazar Angelov use steroids?

We believe the odds are high that Lazar Angelov used anabolic steroids to build his impressive physique.

Lazar has many of the usual signs of long-term steroid use, such as an insanely muscular physique, massive shoulders / traps, and a completely shredded upper body. However, the biggest sign that he is on gear is actually his rapid body transformation.

In 2004 Lazar looked like a regular guy who lifted weights 2-3 times a week. However, within 2 years he transformed his physique from “weekend warrior” to “God bod.”

It’s extremely rare for someone to change their physique this quickly, so we believe this is clear evidence he is on gear.

Besides, Lazar has admitted to using clenbuterol in the past, so it’s not a stretch to think he used other performance enhancing drugs as well. We aren’t 100% positive, but we think the odds are very high that Lazar Angelov is on gear.

Unfortunately, some people will look at Lazar and think that you have to use steroids to build a great physique. Nothing could be further from the truth!

Many people have built great physiques as a natural athlete, or after optimizing their hormones with something like testosterone replacement therapy.

If you are interested in TRT, then we strongly recommend the online provider Fountain TRT, as they make it as easy as possible for you to get started.